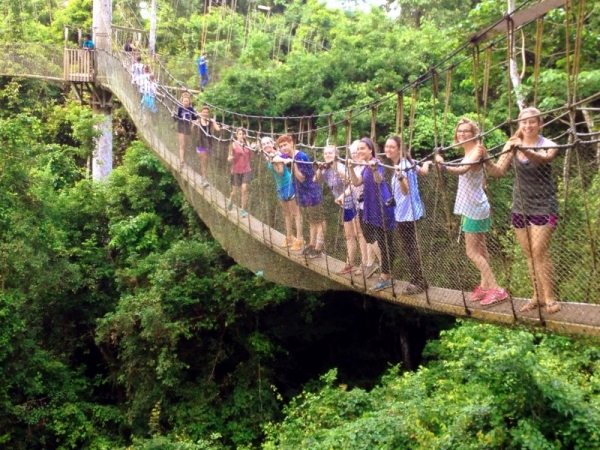 Kakum National Park, located in the coastal environs of the Central Region of Ghana, covers an area of 375 square kilometres (145 sq mi). Established in 1931 as a reserve, it was gazetted as a national park only in 1992 after an initial survey of avifauna was conducted. The area is covered with tropical rainforest. The uniqueness of this park lies in the fact that it was established at the initiative of the local people and not by the State Department of wildlife who are responsible for wildlife preservation in Ghana. It is one of only 2 locations in Africa with a canopy walkway, which is 350 metres (1,150 ft) long and connects seven tree tops which provides access to the forest.

The most notable endangered species of fauna in the park are Diana monkey, giant bongo antelope, yellow-backed duiker and African elephant. It is also an Important Bird Area recognized by the Bird Life International with the bird area fully overlapping the park area. The bird inventory confirmed 266 species in the park, including eight species of global conservation concern. One of these species of concern is the white-breasted guineafowl. Nine species of hornbill and the African grey parrot have been recorded. It is very rich in butterflies as well, and a new species was discovered in 1993. As of 2012, the densest population of forest elephants in Ghana is located in Kakum.

The Museums and Monuments Board of the Republic of Ghana has proposed that UNESCO declare the park a natural World Heritage Site under criteria vii and x. The submission made in 2000 is listed under the tentative List of World Heritage Sites.