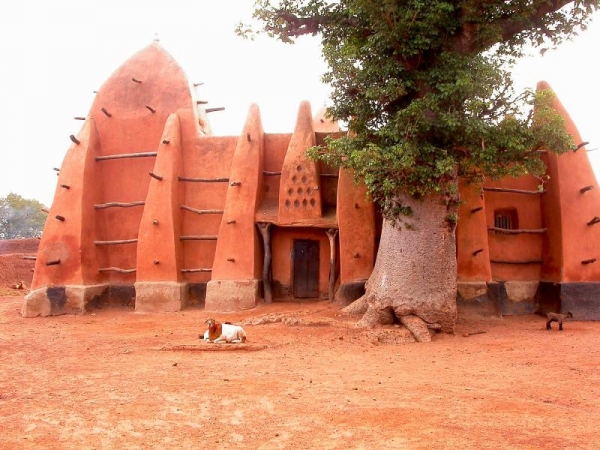 The Larabanga Mosque is a historic mosque, built in the Sudanese architectural style in the village of Larabanga, Ghana. It is the oldest mosque in the country and one of the oldest in West Africa, and has been referred to as the "Mecca of West Africa". It has undergone restoration several times since it was originally founded in 1421 (17th century according to some). The World Monuments Fund (WMF) has contributed substantially to its restoration, and lists it as one of the 100 Most Endangered Sites. The restoration works have revived the knowledge of mud-plaster maintenance.

The mosque has an old Quran, believed by the locals to have been given as a gift from heaven in 1650 to Yidan Barimah Bramah, the Imam at the time, as a result of his prayers. The mosque, built with mud and reeds, has two tall towers in pyramidal shape, one for the mihrab which faces towards Mecca forming the facade on the east and the other as a minaret in the northeast corner. These are buttressed by twelve bulbous shaped structures, which are fitted with timber elements.